AkzoNobel is celebrating the first anniversary of the opening of its flagship manufacturing unit in Ashington. 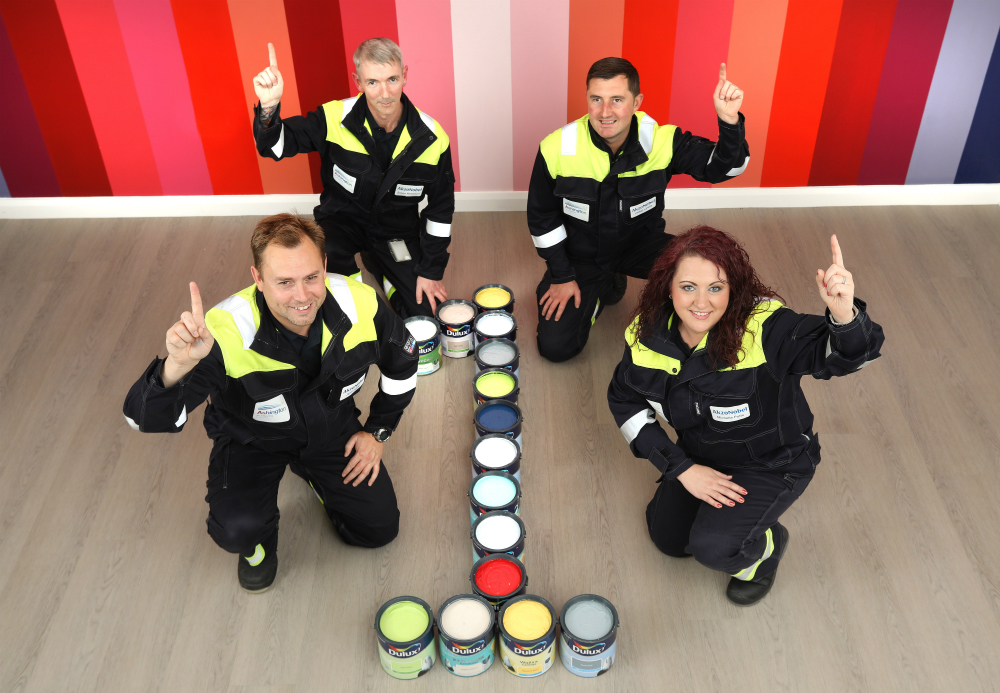 The launch of the £100 million state-of-the-art facility in September 2017 was a significant milestone in AkzoNobel history. Designed to be the world’s most advanced and sustainable paint factory, the Ashington site has now created 175 skilled jobs for local people and is the largest investment to date for AkzoNobel’s Decorative Paints business.

Boasting cutting-edge manufacturing technologies developed specifically for AkzoNobel, the site is capable of doubling the UK’s current paint production levels to 200 million litres per year, the equivalent of 80 million 2.5 litre cans of Dulux, in up to 33,000 different colours.

Over the past 12 months, the site has been steadily increasing its production volumes, transferring products gradually from other AkzoNobel sites to become the new home of the company’s Dulux megabrand in the UK.

“We can’t believe how quickly the last year has gone! From day one, our priority has been to ensure that our customers continued to receive the high-quality products with which they were familiar while we transferred volume to Ashington from some of our other manufacturing units.

“By introducing product lines gradually, we have been able to achieve this and we are now comfortably producing an equivalent of 30 million litres per year with scope to increase this further by the end of 2018.”

The site’s production prowess saw AkzoNobel recognised with the top award in the Manufacturing category at the North East Business Awards earlier in the year, as well as the Green Business Award at the 10th annual Northumberland Business Awards and the Sustainable Innovation Award from British Coatings Federation (BCF) in acknowledgement of the company’s dedication to sustainable manufacturing practices. AkzoNobel’s presence in the region however has always been about more than just paint.

From the moment that the diggers broke ground at the 100,000m2 site, AkzoNobel has been on a mission to bring colour to people’s lives.

Through a variety of initiatives, AkzoNobel Ashington has donated over 500 litres of paint and raised more than £25,000 for various charitable organisations and community projects across the North East.

“The work we have carried out within the local community is something we are incredibly proud of,” said Alex Wardle, site support coordinator and communications officer at AkzoNobel Ashington.

“We are passionate about the local area, its people, places and history and from the outset, we wanted AkzoNobel to become an intrinsic part of that.

“By working together with local schools and community groups as well as dedicated charity partners such as the Nicole Rich Foundation and Northumberland National Park, we have been able to make a real difference to people’s lives, either through fundraising activities or the donation of time and resources.”

The company’s efforts were recognised at the Tyneside and Northumberland regional heat of the North East Business Awards with the Heart of the Community Award, only narrowly missing out on the top prize at the grand final.

Externally, AkzoNobel has enjoyed a stellar year of award wins, but the same is also true within the factory. The company prides itself on maintaining staff engagement rates and in late 2017 was awarded Gold-level Investors in People (IIP) status; an outstanding achievement for any new site or business. In addition to this, following 12 months of campaigning and various staff-led activities, the site was also recognised with Gold Better Health at Work status.

Looking to the future, the Ashington site’s key priorities are very much focused on increasing its production volumes further while also maintaining its position as an outstanding employer and contributor to the local community.

Ashington’s sister site in the region, AkzoNobel Felling, is also expanding its capacity with the addition of a £10.7 million investment in research facilities due to be finished in early 2019. The facility will concentrate on new products for the energy, mining, infrastructure and oil and gas industries, focusing on innovations and efficiencies for protecting steel and concrete structures from damage caused by corrosion, abrasion and fire.