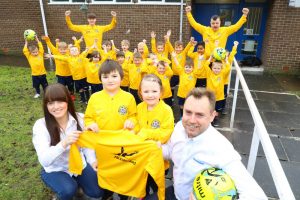 (L to R): Alex Wardle and Jeff Hope from AkzoNobel Ashington with the coaches and players at Amble East End Juniors football club.

Decorative paints and coatings specialist, AkzoNobel, is helping to encourage more young people into sport through a new sponsorship deal with a youth football club in Northumberland.

The North East-based manufacturing giant, which opened its new flagship facility in Ashington in September last year, has partnered with Amble East End Juniors to provide the club with branded rain jackets and tracksuits for its youth teams and coaches.

The mixed gender teams of under 5s and under 8s are enjoying playing in their local football league wearing the new kit from AkzoNobel.

“I first heard about AkzoNobel in Ashington through a parent of one of the players,” said Josh Rutherford, director and head coach at Amble East End Juniors football club.

“Having heard about some of the great work they’re doing in the local community with other youth teams and community groups, I decided to approach them with my proposal for Amble East End Juniors.

“Setting up a junior team from the Tiny Woods Academy is something I wanted to do for a long time, but finding the funds to provide all the kit and equipment we needed was a big challenge.

“AkzoNobel has been a fantastic support. The kids absolutely love their new kit, they look really smart and professional and it has made a huge difference to team morale.

“The teams really stand out from the other clubs now and more kids are wanting to join us as a result, which is fantastic.”

Since opening its £100 million manufacturing unit in Ashington, AkzoNobel has been on a self-professed mission to ‘bring colour to people’s lives’. To date, the plant has supported over 40 different community initiatives through various means of sponsorship, including monetary and paint donations.

“We were really impressed with the aspirations and the set-up at Amble East End Juniors football club,” said Jeff Hope, head of manufacturing at AkzoNobel Ashington.

“It’s so important to ensure that all young people have access to sport and fitness clubs, especially those living in remote areas. The children and the coaches at the club are all so enthusiastic, they do an amazing job of encouraging others to get involved with the team.

“From the outset, the vision for our new site was to create a manufacturing facility that not only outperforms the competition from a technological perspective, but that also provides a unique and inspiring place for people to work, centred around a culture of community within the plant and the wider area.

“We feel that we have really achieved this at and we are extremely proud to sponsor the Amble East End Juniors.”

To find out more about AkzoNobel, visit www.akzonobel.com.