A Northumberland-based mental health charity is celebrating after receiving a huge, six-figure boost from The National Lottery Community Fund, the largest funder of community activity in the UK, to further help combat social isolation and expand its award-winning services across the county. 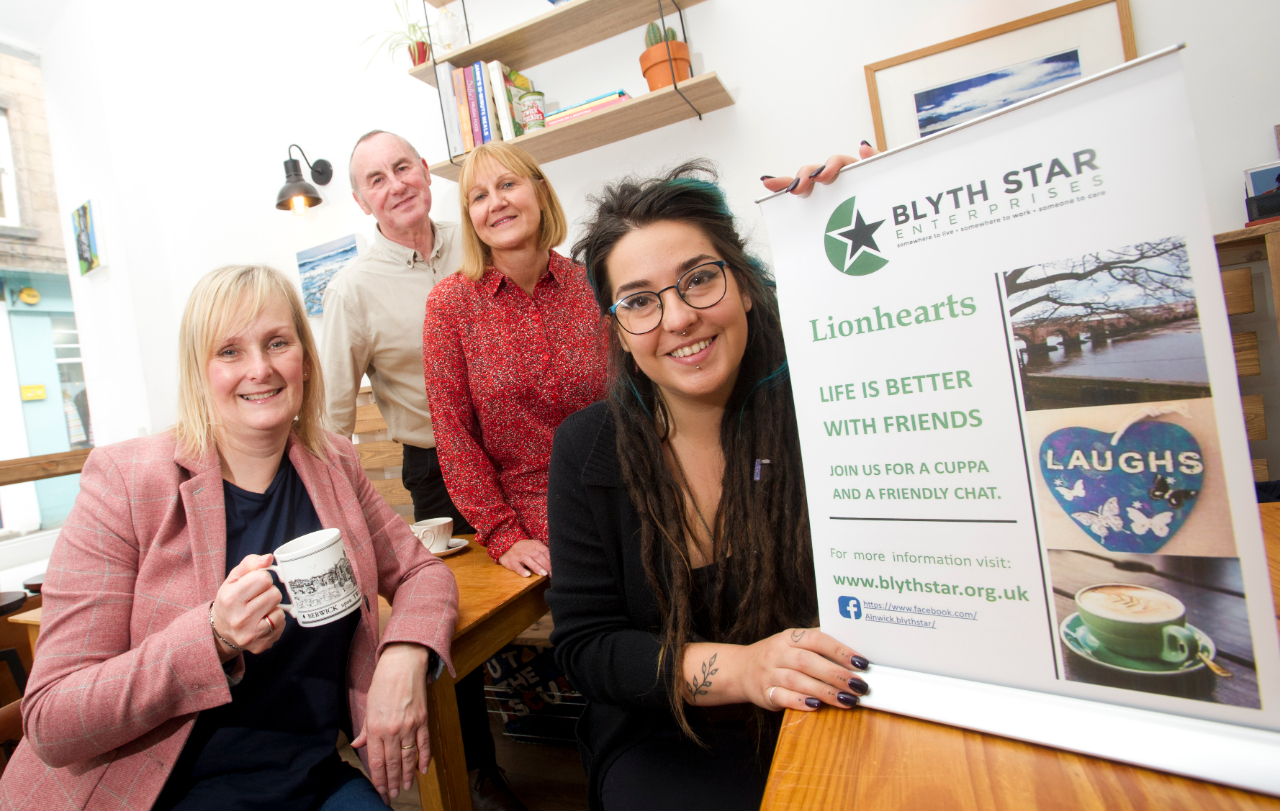 Blyth Star Enterprises has been awarded £100,000 of funding – raised by National Lottery players – over the course of three years, to develop its popular ‘Lionhearts’ day service in Berwick-upon-Tweed.

Founded in 2008, Lionhearts is a client-led service which aims to help people living with mental health issues, or who are socially isolated, to come together on a daily or weekly basis to socialise and participate in activities which benefit their health and wellbeing and allow them to live better, more independent lives.

With activities including walking groups, lunch clubs with cookery classes, IT support, art and craft sessions and a dedicated breakfast club for men, the service has been well-received in its hometown of Alnwick. Recognising its impact, commissioners from Northumberland County Council approached Blyth Star Enterprises about the potential to replicate the Lionhearts service in the north of the county.

Skirting the Scottish border, Berwick is the northernmost town in Northumberland. Recognised as an area of high economic deprivation due to its geographic remoteness, loneliness and social isolation are among the key issues which Lionhearts is aiming to combat.

“Through our own fundraising efforts, successful grant applications, and the generosity of charitable trusts and philanthropists, over the past 30 years, Blyth Star Enterprises has remained agile, responding to the changing needs of our clients as well as the economic climate to grow and develop our living support and innovative range of day services,” said Ann Marie Lister, training and organisational development manager at Blyth Star Enterprises.

“We were delighted to be approached about developing our services in Berwick-upon-Tweed, naturally our only initial concern was how we were going to fund it, which is where our relationship with The National Lottery Community Fund began.”

Mark Purvis, Deputy Director of England Funding at The National Lottery Community Fund, said: “Thanks to National Lottery players, we’re able to support more projects addressing loneliness than any other funder in the UK. We know from the grants we award that projects like Lionhearts are vital to tackling social isolation, bringing people together, and leaving communities like Berwick-Upon-Tweed stronger and better connected.”

The National Lottery Community Fund is responsible for giving out money raised by National Lottery players for good causes. Last year it awarded over half a billion pounds (£511.1 million) of life-changing funding to communities across the UK and supported over 12,000 projects to turn their great ideas into reality.

Blyth Star Enterprises were successful in applying for £100,000 through The National Lottery Community Fund’s ‘Building Connections Fund’, a grant which targeted community organisations and charities who tackle issues like loneliness and social isolation.

On successfully acquiring the funding, Blyth Star has immediately set to work on establishing the new Lionhearts group in Berwick, working closely with members of the community and local businesses to help spread the word.

One such business is the Northern Soul Kitchen. Operated by social entrepreneurs, Millie Stanford and Harriet Grecian, the community café, which provides pay as you feel meals made from unsold food donated by local grocers and supermarkets from its centrally located hub in Berwick, has become the temporary home of Lionhearts.

“When we launched Northern Soul Kitchen in 2016, we wanted to create a welcoming space that anyone could use, so when Ann Marie approached us about hosting weekly Lionhearts sessions, we were happy to oblige,” said Millie.

“Through my own experiences with mental health services, I recognised that there was a gap in the market for something like Lionhearts which is so open and you don’t need a referral to attend. I’m really pleased that the service has gotten off to such a great start and hope that it will help to make a difference to people’s lives for years to come.”

“We are absolutely indebted to The National Lottery Community Fund and to Millie and her team at the Northern Soul Kitchen for helping us to get the Lionhearts Berwick project off the ground,” Ann Marie added.

“Berwick is an incredibly tight-knit community but having the support of these two fantastic organisations has enabled us to open so many doors and we already have 8 regular service users attending the weekly sessions.”

Taking place each Friday between 10-11am, Lionhearts Berwick is an open service available to anyone suffering from mental health issues or the pressures of loneliness. For more information about how to get involved, contact Ann Marie Lister on 07545 424 862 or visit www.blythstar.org.uk.