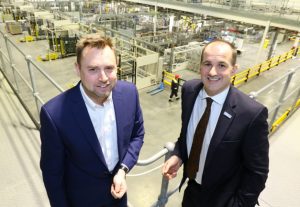 Jake Berry MP, Minister for the Northern Powerhouse and Local Growth, has praised AkzoNobel for its innovation and commitment to sustainable manufacturing during a visit to the company’s Ashington factory.

The £100m facility, the largest single investment ever made by the paints and coatings business, was officially opened in September 2017 and is the centre of production for Dulux, the world’s most popular paint brand.

During his visit, the minister met with plant management and spoke with delegates participating in a painting and decorating training course at the purpose-built Dulux Academy.

“AkzoNobel’s £100m investment in their Ashington facility is a vote of confidence in the Northern Powerhouse and the skill and talent of its people,” Mr Berry said.

“It was fascinating to learn how through innovation they are leading the way on sustainable paint manufacturing in the UK as well as contributing to the growing local economy.”

AkzoNobel’s Ashington factory will be capable of doubling current UK production levels to 200 million litres per year, the equivalent of 80 million 2.5 litre cans of Dulux, in up to 33,000 different colours, approximately enough paint to redecorate every living room, bathroom and kitchen in the UK.

The plant uses a variety of renewable energy sources including photovoltaic cells and a biomass boiler, alongside an automated manufacturing process which saves water, waste and energy.

Jeff Hope, Head of Manufacturing Unit at Ashington, added: “We’re incredibly proud of what AkzoNobel has created at Ashington so it was a pleasure to welcome Jake Berry to the site.  I think the minister was impressed by the state-of-the-art technology we operate, which is the best in the world and also by the culture that has been created here by our outstanding workforce.

“Our investment in Ashington, alongside our other plant in Felling, is a huge vote of confidence for the North East and I believe it makes us a major contributor to the Northern Powerhouse.”