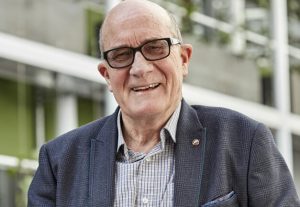 Northumbria Law School has been awarded its first Leverhulme award for a visiting professor to lecture and collaborate on research at the University.

Professor Warren Brookbanks, from Auckland University of Technology, is a globally-recognised authority in criminal law, mental health law, criminal justice and non-adversarial justice. He is co-author of New Zealand’s leading criminal law publication Principles of Criminal Law – a highly influential text book referred to by legal academics and practitioners around the world.

The Leverhulme Trust makes awards for the support of research and education and is highly prized within the UK higher education sector. Northumbria Law School’s success in receiving an award is a measure of its growing reputation, and in particular the strength of research undertaken by its internationally-leading Northumbria University Centre for Evidence and Criminal Justice research centre.

As well as supporting collaborative research, the £5,200 Leverhulme fund will facilitate a series of high-profile lectures by Professor Brookbanks, hosted by the Centre for Evidence and Criminal Justice. These will tackle areas such as concerns around mental wellbeing in the legal profession, international developments in fitness to plead, and cases of negligence in medical manslaughter. Professor Brookbanks will also deliver a lecture for undergraduates on the ‘sexsomnia defence’ – exploring the law around sexual behaviour in sleep. Students will also be able to take part in question and answer sessions with him.

Professor Brookbanks said: “It is a great privilege to be the recipient of a Leverhulme Visiting Professorship. I am indebted to the staff at Northumbria Law School, in particular Associate Professor Nicola Wake, for making this possible. I am looking forward to engaging with people through the public lecture series and meeting with Northumbria law students, in addition to working in collaboration with academic researchers at Northumbria Law School.

Associate Professor Doctor Nicola Wake, who led the Leverhulme bid and will be working closely with Professor Brookbanks, said: “To have such an influential and well-respected visiting professor lecturing, and collaborating on research and publications at Northumbria is hugely exciting for our academics and a wonderful learning opportunity for our students. His writings on areas like fitness to plead have informed law making and are what academics and practitioners refer to when they need guidance.

“Attracting our first Leverhulme funding for a visiting professor is also extremely prestigious. It confirms just how significant the research we are undertaking here is considered – both in the UK and internationally.  Along with my colleagues I am looking forward immensely to working with Professor Brookbanks and to the insight he will bring to our subject.”

Professor Brookbanks will be based at Northumbria Law School between January and April 2018. His first lecture on 10 January 2018 will be entitled ‘International Developments in Fitness to Plead’.