The life of a 72-year old retired cardiac nurse from Whinfield in Darlington has been totally transformed after undergoing treatment for debilitating acid reflux symptoms at the award winning and not-for-profit, Nuffield Health Tees Hospital in Stockton. 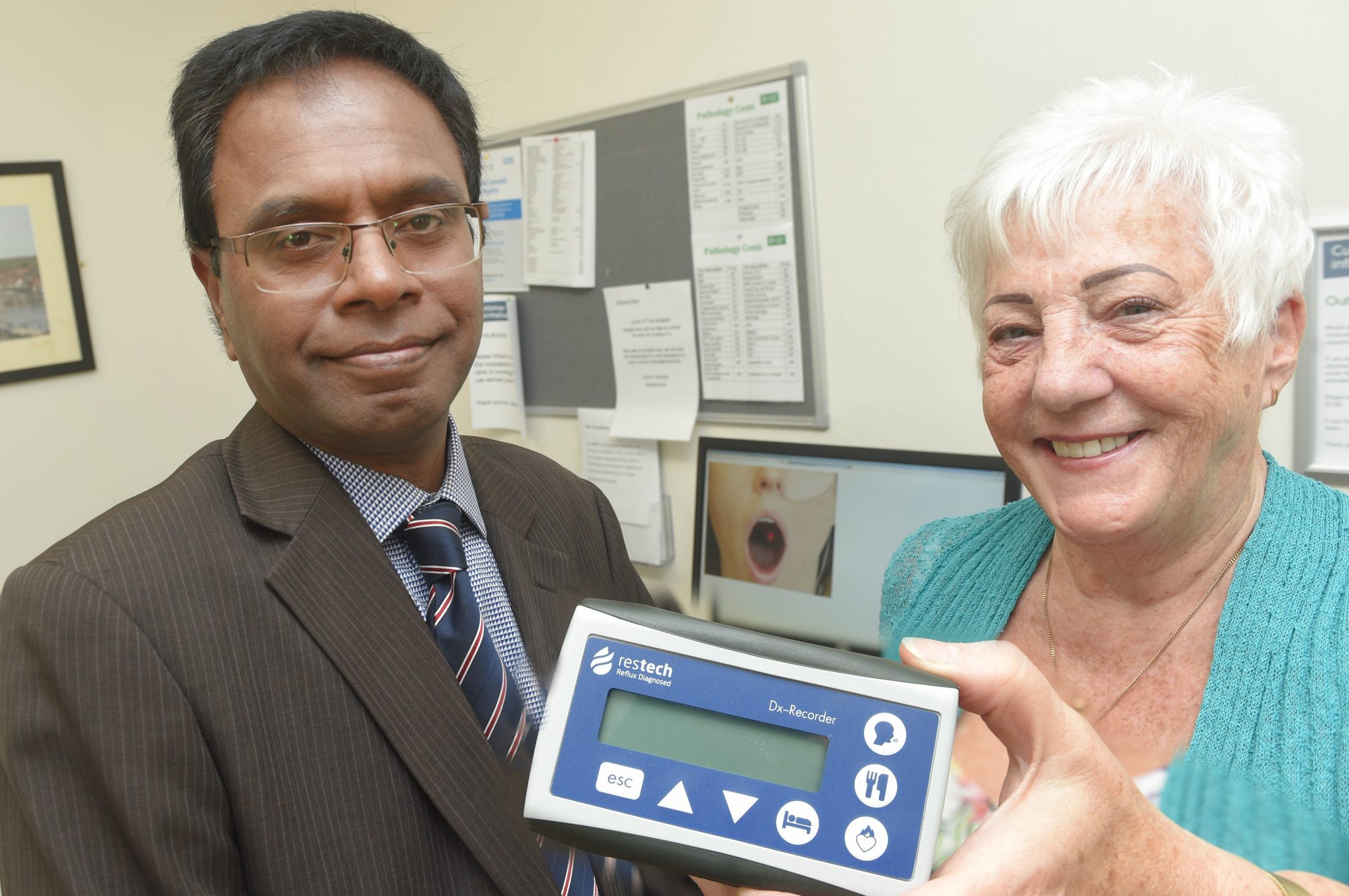 Maggie Frost, a passionate ballroom dancer, endured 8 years of life-limiting discomfort with indigestion, shortness of breath, constant chest infections, sleepless nights and a persistent cough that stopped her from doing the things she and husband Ian enjoy in their retirement. This included their love of competing in ballroom dancing competitions, walking the dog, going to the theatre and taking holidays abroad.

“Now I have my life back. I’m back on the dance floor with a whole new lease of life!” said Maggie.

Initially she saw an ENT physician who thought the symptoms were caused by gastric reflux and during the last 4 years underwent various tests including lung function scans, gastroscopies and pH manometry tests, which proved inconclusive.

“My symptoms gradually became so bad it was making my life a misery. I was unable to continue with my hobbies such as ballroom dancing and I was so breathless that walking the dog was becoming a problem too. Eventually my symptoms got so severe that I was wheezing just going upstairs and the constant coughing was also affecting my voice,” explains Maggie.

For many years Maggie was prescribed inhalers and steroids for the breathlessness and wheezing and had also been taking omeprazole, which reduces the amount of acid your stomach produces, but she had to stop taking it prior to some procedures which left her suffering from terrible indigestion, heart burn and chest pain.

Feeling frustrated and desperate to find a solution, in January this year Maggie took matters into her own hands by researching gastric reflux, also known as GERD (gastroesophageal reflux disease). She found an article about a procedure called Stretta Therapy, a unique non-surgical outpatient treatment, which is performed by Professor Viswanath at Nuffield Health Tees Hospital.

Maggie said: “My GP referred me to Professor Viswanath at Nuffield Health Tees Hospital. At my first appointment he advised I should have a gastroscopy and a Restech pH study to accurately diagnose my reflux condition. The results showed a significant reflux and I decided to go ahead with the Stretta procedure. That was four months ago now, and the improvement in my symptoms is unbelievable! I am sleeping better, not waking up at 5 am with terrible regurgitation and choking.”

Professor Viswanath, a consultant with more than 25 years’ experience specialising in General Surgery and Upper GI (Gastro-Intestinal) conditions, has run a clinic at Nuffield Health Tees Hospital in Stockton for 18 years. He also practices at the James Cook University Hospital in Middlesbrough.

“Extreme acid reflux is not easy to diagnose and has an enormous impact on a patient’s quality of life, like in the case of Mrs Frost, it was preventing her from leading a full and active life. She’s a grandmother with family at home and abroad and the symptoms were making travel and physical activities impossible for her.

“Once the severity of Mrs Frost’s reflux condition was diagnosed, it was clear that Stretta Therapy was the most appropriate and targeted course of treatment to resolve her symptoms.”

Stretta Therapy is a non-surgical procedure performed using an endoscope and a Stretta radiofrequency catheter (a thin catheter with a balloon at the end). No incisions, stitches or implants are required. Patients are sedated and the endoscope is placed through the mouth into the oesophagus. The procedure can be completed within an hour and most patients are discharged after few hours on the same day.

The aim of Stretta Therapy is to strengthen the LES (lower oesophagal sphincter muscle) to reduce the occurrence and severity of acid reflux. To achieve this, the catheter is guided through the endoscope. Once in position, the balloon is inflated, exposing sharp probes that release radio frequency energy into the LES and upper stomach. The energy creates thermal lesions on the targeted areas. When these lesions heal, the LES muscles strengthen reducing the possibility of stomach acid reflux.

Describing Maggie’s progress, Professor Viswanath, said: “I’m delighted with the outcome we’ve achieved for Mrs Frost. She has responded well to the treatment and is enjoying life again doing the things she loves.”

There is no looking back for Maggie after the procedure. She said: “My breathing is much improved and I am delighted to be dancing again. I travelled to Blackpool recently to see the BBC Strictly Come Dancing Professionals perform. That would have been impossible for me before the procedure, and because I’m not coughing as much, my voice is not hoarse which my friends and family have noticed. I cannot thank Professor Viswanath enough. He has given me a new lease of life.”

Maggie is also back to walking the dog with husband Ian and is considering taking up tai chi in addition to running her weekly community painting group with friends in Darlington.

The age of patients treated by Professor Viswanath, for diagnosing and treating acid reflux symptoms using the Restech pH study and Stretta Therapy, ranges from people in their early thirties through to their eighties and nineties. Nuffield Health Tees Hospital is the only private hospital with an ‘Outstanding’ Care Quality Commission (CQC) rating north of Leeds. It has been providing outstanding levels of care to patients from Stockton, Darlington, Middlesbrough and the surrounding areas since 1981. The hospital also attracts large numbers of patients from further afield, including North Yorkshire and Cumbria.