Special needs under the spotlight at groundbreaking school performance

Students from Cleaswell Hill School in Guide Post, Choppington, have taken to the stage to perform their own, very special version of the popular musical, The Greatest Showman, with a very poignant societal message. 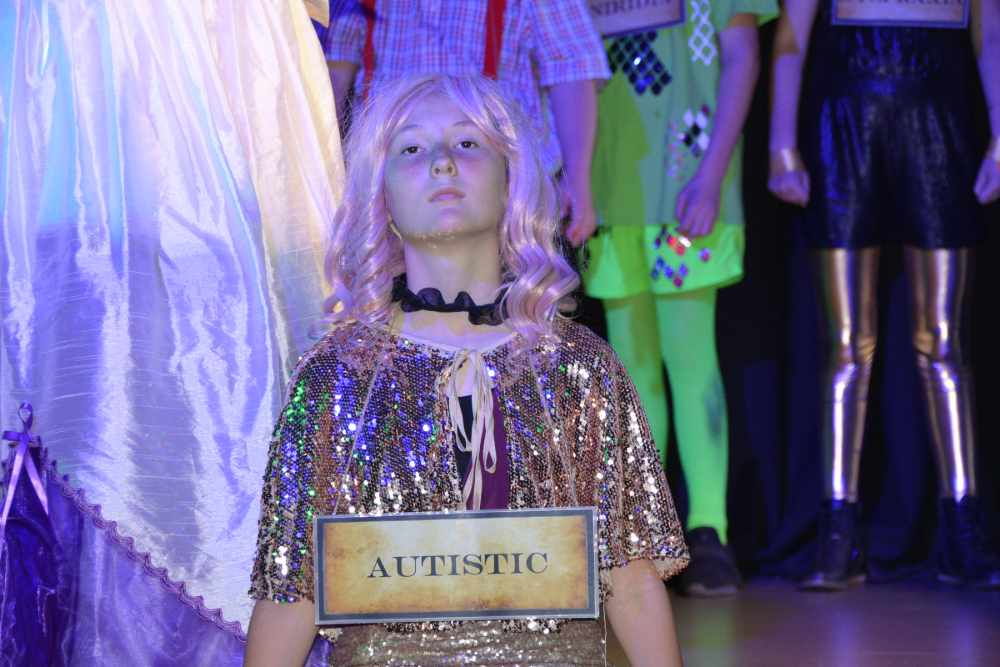 Mirroring the events of the 2017 hit film starring Hugh Jackman which portrayed the life of the ‘Circus King’, P.T Barnum, the school production featured all of the costumes, dancers, lights and sounds of the greatest show on Earth, but held a few twists in store for its sold-out audiences of family, friends and the local community.

During the performance of the film’s singalong smash hit, ‘This is me’, the all-student cast, aged between 11 and 18 stood candidly facing the audience wearing handwritten tags, identifying their special need. On reaching the chorus, the children, labelled with Autism, Down’s syndrome, visual impairments, ADHD and a range of other complex physical and learning disabilities, tore away the front of their labels to reveal a positive adjective underneath, describing each of their personalities such as ‘happy’, ‘brave’, ‘kind’ and ‘fearless’.

See the moment in action.

“At some point in their lives, the children that we teach have each been treated differently because of their ‘disabilities’ or ‘conditions’, so the story of The Greatest Showman, which brought together people from all walks of life and placed them centre stage deeply resonates with them. To be able to show this, visually, by standing on the stage and tearing away the labels that they have been given by medical professionals and members of society to show who they really are underneath is truly moving.

“We’ve always believed that the arts are accessible to everyone, a pathway to communicate with people of all ages, from all across the world, regardless of culture, race, gender or ability.

“In starting this project, we had no idea how much this show would end up meaning to us all and we have been absolutely blown away by the sheer pride these extraordinary young people have in being themselves. They have shown us all courage, resilience, and pride in who they are and we are so proud to have worked alongside them to bring this performance to life.”

Staged over six recitals at East Bedlington Community Centre’s Platform 1 music venue, the series of ‘The Greatest Show’ performances follows on from the success of the school’s Christmas ‘nativity with a twist’ last December.

All monies raised from ticket sales for the shows has been donated back to the school, which also operates as a registered charity, for the continued improvement of the school’s specialist facilities for its pupils with a range of complex learning and physical disabilities.

“We have been completely overwhelmed with the positive response we have received from the public to this year’s summer performance,” said Mike Jackson, headteacher at Cleaswell Hill School.

“Since we launched our drama programme at the school in 2017, each year, the performances staged by the staff and students have become more and more ambitious, but this year, they have really taken things to the next level.

“It’s sad to think that in such a forward-thinking society, we still live in a world where discrimination can be allowed to exist. In standing up for who they are and showing the North East what they can achieve, our talented youngsters have become true inspirations and we are so incredibly proud of them. I’d like to thank each and every person who has helped to make The Greatest Show possible.”

Cleaswell Hill School supports over 180 children and young people aged four to 19 with a range of special educational needs. To find out more, visit: www.cleaswellhill.northumberland.sch.uk.

Photograph taken of Cleaswell Hill School pupil during a performance of The Greatest Show.
blog